Height is a crucial physical requirement for the basketball sport, and therefore NBA athletes are among the tallest athletes around the world. Moreover, the NBA height matters for every position since the tall players have a significant advantage over the short players in both shooting and defensive mechanisms. 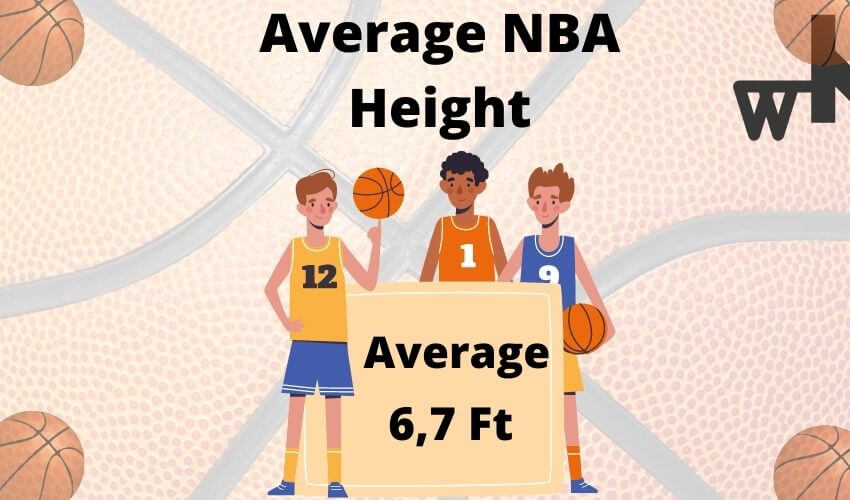 As a general perception, you have to be the tallest to be the best. Athletes above 7″ have 20% higher chances of making it to the NBA than ordinary people. However, statistics of the past few seasons reveal that height matters, but it is not everything in the NBA. The Average NBA height is around 6’7″ ‘It tends to fluctuate with every season, and in 2019-2020, the average NBA height was around 6’5′”. The tallest average height was recorded in 1987, and it was around 6’7″.

We discovered some exciting details and facts while looking at the past statistics of average NBA height by position. Although height is among NBA athletes’ most considered physical abilities, some functions are more critical for measurement than others. For example, height is less vital for positions like a point guard. However, the tallest players are selected for the functions like forwarding and center.

Height is generally considered less important for this position since this position is more about skills and practice. The statistics of the past few seasons reveal that the average NBA point guard height is 5’11″ ‘to 6’3″. However, the NBA Height range for the point guard position is comprehensive, and many short players have a successful careers in this position.

The Average Height Of The Shooting Guard

The shooting Guard is the crucial position on the basketball court, and the players in this position should be skillful enough to transition between offensive and defensive mode efficiently. Defensively, the shooting is responsible for making the baskets beyond the three-point line, and defensively, the player is responsible for guarding and rebounding the opponents.

The players in this position are taller than the point guard players, and the average NBA shooting guard height is 6’5″. With the continuous evolution of the game and respective techniques over the season, the position of the point guard has also seen many height fluctuations. In 200o, the average shooting guard NBA height recorded was somewhere between 6’5″ to 6’6″.

In the past few seasons, the average shooting guard height was observed between 6’3″ to 6’6″. The best shooting guard athlete is James Harden, who is 6’5″ tall. He plays for Brooklyn Nets and is known for his unmatched ability to play perfectly in defensive and defensive mode. Currently, the tallest shooting Guard is Paul George, who is 6’8″ tall and plays for the Clippers.

All the best players of their times are blessed with the longest wingspan. A longer wingspan lets you dunk and shoot consent and block shots without moving your feet. As a general rule of thumb, tall players have longer wingspans. The average NBA height is somewhere between 6’5″ and 6’6″. The average wingspan in this height range is recorded as 6’10”.

However, the wingspan measurement varies from player to player and depends upon various factors like playing position and skill level. The longest wingspan recorded in NBA history is 8’2.25″, and it belongs to Tock Fall, who was 7’7″tall. He has an excellent APE index of around 8-inches taking his scoring ability to a new level.

Height is positively correlated with wingspan. However, it is not always the case. History shows many examples in which athletes have a negative APE index. For instance, Cody Zeller, a famous Power forward, was 7′ tall, while his wingspan was 6’8.” In this way, his APE index was -2.

Power forward is a critical position since players at this position get the maximum chances to score. Also, the Power along plays a crucial role in defensive strategies and is responsible for the rebounds and setting up the screen. A tall player at this position has a significant advantage of height, and therefore, the taller players in the team are usually selected for this position. The average power forward height in NBA is between 6’8″ and 6’11”.

Although forward power roles have been changed over time, no significant fluctuation in average height is observed. This is because, unlike past Power forwards who were more involved in defensive strategies, power shooters are now more about making 3-pointers. But whatever the role is, this position is more about height, and therefore no significant change in average size is observed over the seasons.

This position has seen the most significant fluctuation over the seasons. It is a versatile position between the Power forwards and centers. Small forwards are responsible for tertiary and secondary rebounders. Since the scoring strategies have grown with time, the average height IS also changed significantly.

The tallest player on the team plays at the center position, and Power forwards are second to them. Since these players play close to the basket, height plays a crucial role in successful rebounds and close shots. Therefore, usually, the players above 7′ are chosen for this position and are trained for the specialized skills of this position.

The tallest center in NBA history was George Mosman, who is 7’7″ tall. The average NBA height of the center is between 6’9″ to 7′. Since the size is critical to this position, history hasn’t observed a significant change in the average values.

How tall is the average center in the NBA?

The current average center height in the NBA is 7 feet. However, the average size of the center varies from season to season. Therefore, the average NBA height of the centers falls somewhere between 6’9″ and 7’2″.

How many are 7 footers in the NBA?

According to the statistics released by the National Basketball Association, there are 23 7-footers listed in the season 2021-2022.

What is Muggsy Bogues’s height?

Mugsy Bouges is 5′ 2.25″ tall and is the shortest player ever to make it to the National Basketball Association.

Average NBA height has seen many fluctuations since the gaming strategies, and player roles at different positions have been changed. However, size plays a significant role for the players playing at the places. Tall players are better at rebounding than short players enhancing their ability to score.

Playing basketball outdoors comes with its own unique set of challenges. One of the main issues is a slippery or a less grippy outdoor basketball.  Nothing is more frustrating than having the ball get out of control at a crucial moment in the game. Even worse, you might not be able to gain traction and…

We have watched in NBA tournaments that some players are wearing face masks No doubt they took the center of the attraction, but have you ever wondered why NBA players wear masks? Though basketball game is filled with full of surprising injuries. Facial injuries are common in basketball sport. So it feels uncomfortable to play basketball wearing…

If you are a basketball fan and you follow the game religiously, then stay here because, in this article, we are going to talk about two of your favorite players, Larry bird VS LeBron James. Making a comparison between two equally good players is not an easy thing to do. However, depending upon their overall performances,…

Many athletes have used their own experiences to design better shoes over time: shoes such as the Under Armour Men’s Curry 3 featured in our ankle support guide are designed using regular dialog with the players. Given the long history of some of these collabs, however, some of the venerable classics aren’t going to serve…