Have you ever dunked on a double rim basketball hoop? What is the purpose of the double rim, and is it good to play on a double rim? Double rims are much more durable and more robust because they stand up with the weight of hanging the players. In addition, they have more strength than single rims.

Usually, you will find them on outdoor public courts because of the surrounding conditions of the outdoors. Double rims are much thick than single rims, but they are sometimes annoying while dunking and hooping. Instead of falling, the ball into the hoop often bounces back. That’s why most of the players consider it hard to shoot in.

Do you want to hang on the rims? If yes, you must try the double rim basketball rim because they are much more robust and would not bend up easily.

Our Experience on Double Rim 2022

What we love about the plus point of the rim is the durability. Our experience was excellent because we could hang on to it after dunking for more enjoyment. And the surprising part was they wouldn’t break. But a little bit harder to shoot the ball into the hoop. We felt like we have to put more force on the arc to plug into.

Is it Good to play on a Double Rim Basketball Hoop?

Many Players stated that the double rim is a little frustrating because it may hurt shooting confidence. But there are plenty of benefits to playing it. Apart from its strength and durability, you can improve your shooting and hooping skills. At a glance, you will not feel any difference while shooting but playing on a double rim can help you change your shot in two significant ways.

We’ve briefly described how a double rum would impact your shots.

You will hear from the announcers “in and out” of the shot. Now you can improve your arc of the basketball shot and set more of a hook on shooting. When you put more arc on your shot, the ball enters the hoop even at steeper angles. As a result, there will be fewer chances of the ball bouncing back out of the rim or being trapped in the rim.

If you’re a good shooter, your arc should be higher. This is because there will be chances of the ball going into the hoop, but it also improves your next point, shooting touch.

You should have a “shooting touch” if you are a great shooter. It is the opposite of shooting a brick. Using this trick, you can shoot the ball even lightly and gently. There will be more chances of the ball going into the hoop rather than bouncing out. Even if you shoot the ball slightly, the ball will bounce on the rim and fall into the round. Instead of leaping out of the rim, shooting touch helps to fall into the rim.

Check out the best portable basketball hoops under 300

Since the double rim is more durable and thick than a single, you must shoot the ball with more touch to get more shots. Even if you want to get a layup, you will learn how to toss the basketball and polish your shooting skill rather than shooting the ball with force.

As we experienced, the double rim is quite frustrating, and getting shots is harder. But you will learn the perfect shots through double rim because it will force you to put more arc and improve your shooting touch. If you play regularly on the double, go and play on the single rim. You will feel pro yourself in perfect shots because a single rim is more accessible than a double, and you have improved your shots on the double.

if you want to get a double rim, we suggest having these rims 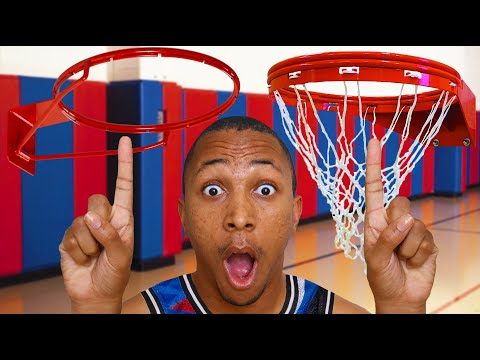 If you play on the double rim, it is pretty good but frustrating. We suggest improving your shooting skills on it because you will learn to put higher arc and shooting touch that way, you will be a great shooter. We’d love to know your experience with double rims. Stay in touch with us!

To become an expert in the basketball game, the player must know all the sensitive baselines of basketball. For performing like an expert, the essential parts of the game are necessary to understand. A player must perceive several different baselines to play in crucial situations during the game. The players and the fans need to…

Signature shoes are, for the most part, designed for indoor use. But that’s not to say they can’t be used on outdoor courts — as our list of the best outdoor basketball shoes that don’t get dirty easily shows. The aforementioned ranking is topped by the Nike Men’s Air Visi Pro V and the Beita…

Playing basketball early on in life can have various advantages. It enhances and adds to a child’s basketball skills and is also great for their physical and mental well-being. What Size Basketball Is Good For Kids is a fundamental question. However, it can be difficult for kids to practice, play and control a standard-sized basketball. What Size…

Height is a crucial physical requirement for the basketball sport, and therefore NBA athletes are among the tallest athletes around the world. Moreover, the NBA height matters for every position since the tall players have a significant advantage over the short players in both shooting and defensive mechanisms. The average NBA height fluctuates with every season, and…

Nowadays, Spalding vs. Wilson basketball is a hot topic because both companies quickly gained fame. Spalding has got the golden point of producing basketball for NBA tournaments, Spalding NBA Official basketball. On the other hand, Wilson is also making some robust and marvelous basketballs which many basketball athletes are also using. Therefore, keeping an eye on this…