Soccer players will state that it is a universal sport. But last, it is not much attractive as basketball. If we compare their inventions, we find that basketball is the 19th century invented game, unlike soccer which was invented thousand years ago. So today, we will compare their popularity, competition, and other matters.

Basketball vs Soccer and Their Brief Background

Basketball was first invented about decades ago in 1891. However, most famous players played a vital role in making basketball popular. Some of the players are Bill Russel, Wilt Chamberlain, and George Mikan. After inventing, basketball was firmly established its roots in the 20th century. After making the strong roots of the NBA, other famous players in the 80s to 90s like Michael Jordan, Larry Bird, and Magic Johnson made the NBA fruitful.

The central part of basketball is you have to score and dunk the ball into the hoop when the opposite team player wants to stop you. On the other hand, soccer is easy to achieve and much more straightforward than basketball. It is infrequent in the NBA game for two teams to score 100.

Soccer was invented about 2000 years ago. Its first rule was rooted in England. Soccer has a huge fan base in Spain, England, and Italy. However, soccer is a world-famous sport. It has gained massive popularity due to the world cup every four years. Soccer is completely different than basketball because of its lower score system. When a player scores a point, it is celebrated like a champion, and its fans get excited.

Besides that, soccer is more accessible; you can play it anywhere if you have a soccer ball.

Comparison Between Basketball and Soccer

Soccer is not an intense game as compared to basketball. Players pass the ball at a slower rate. At the same time, it takes a period to take the ball from one team to another. At the same time, basketball is a sharp game. It is quite a fast and engaging game. In basketball, you are standing on the backcourt. In the second minute, you will be helping your teammates to get the basketball into the rim. Unlike soccer, a basketball game is more engaging and fast.

Some basketball fans will argue that watching soccer is more tedious due to the slow rate. As we watched, many of the soccer games came to an end on a 0-0 draw. That means both teams run 90 minutes without scoring any goals. Isn’t that weird? Being a basketball player, this is strange for me. Unlike soccer, a basketball game is a constant where teams run-up over the court. They run at a faster pace compared to soccer.

Check out our comparison of in-ground vs. portable basketball hoops.

Which is a better sport, soccer or basketball?

Well, it depends upon the fans of different sports. Both are different from each other. Basketball is a sharp and speedy game. On the other hand, soccer is a peaceful and slow pace sport. Their scoring system is also different. Along with that, their running on the floor is also quite different.

Is basketball harder than soccer?

The answer is yes, and basketball is harder than soccer. A soccer player runs 7 miles in a whole game. Soccer has a broader play area than basketball so that you can run efficiently. Unlike soccer, the basketball court dimension is not more comprehensive than the soccer field.

Which is more famous, soccer or basketball?

A case study shows that of 10 people, 4 of them consider themselves soccer fans. That makes soccer the world’s most popular game. Soccer is a universal game. So the answer is soccer has a more extensive fan base than basketball.

Is basketball safer than soccer?

There is are no arguments between them because every sport is different and is loved by their fans. Being a basketball player, I always admit that basketball is more entertaining and subjective. Although it might not be a universal game as soccer is but basketball is a more eye-catchy and intense sport. I hope you have understood the difference between soccer vs. basketball. Thanks!

Have you ever been amazed at those fantastic basketball players who spin the ball on their fingers so precisely and effortlessly? I have always found this whole maneuver very charming. But I was living under the illusion that I could never do it. But then, one day, I saw my dad doing the same thing….

Every sport has some rules. Similarly, basketball game also has some restrictions. There are numerous things that an NBA player can’t do during a tournament. During the basketball game, both teams try their best to score higher. However, when a player does something illegal against the opposite team’s player in this race, that will be… 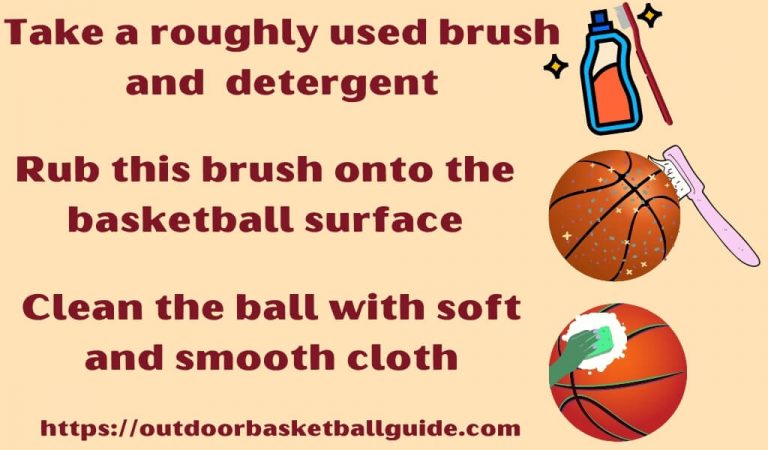 Whether you have a keen desire to play Basketball or not, playing Basketball gives you a nice feeling. Since childhood, you started to play Basketball, and it was evident that you love Basketball. But, it would help if you also kept your Basketball clean. So, today, we’ll guide you on how to clean a basketball? So,…